Here’s a new use, upcycle, for a vintage, two socket light fixture.

These two-socket light fixtures were plentiful in houses in the early part of the 20th century. The 19teens and 20s or thereabout. They hung from the ceiling. They were not equipped for any type of shade, leaving the bulb bare. Some were quite ornate, others rather plain. They’re fun to take apart and turn into something a bit more useful.

It’s very easy, but there is a a tad more to it than you’d expect.

The fixture will have a light socket screwed in. It generally sticks up too far for anything to sit flat. You could put a taper candle in there, but I’ve never had luck finding one to fit. Your mission will be to unscrew the socket. Might be easy, might be hard. I had one of each. The hard one was just tight and needed more than my hand and finger strength to unscrew it. Had to use a pair of pliers to hold one part while I unscrewed the other side with my fingers.

It comes apart looking like this. Yours might be different, but it should at least be similar. 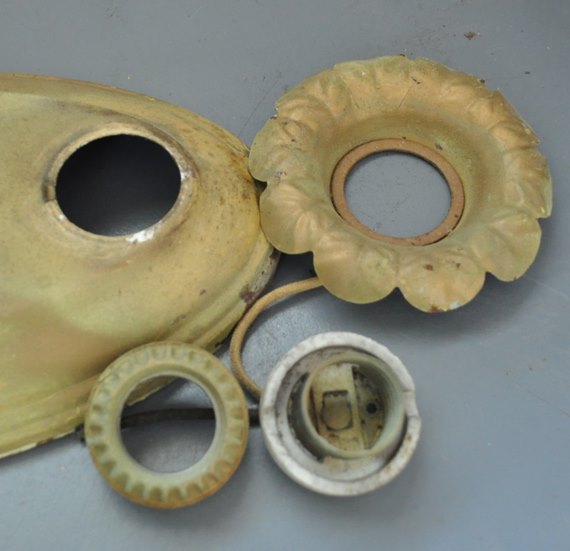 Now, a hole with no bottom where the candle goes isn’t the best idea. We need to make something for the candle to sit on other than the table.

I used an ArtEmboss copper sheet

When the copper comes out of the tube it still holds a curved shape, so I used the cardboard tube the copper was wrapped around like a rolling pin to flatten it.

Next step is to draw circles for the bottoms and cut them out. If your fixture had a washer (See the second picture above) use it to trace around the outside for a correct fit. If it doesn’t have one you can draw around the cup piece and cut slightly larger. My copper came with a stylus, but I found that a ball point pen worked better. 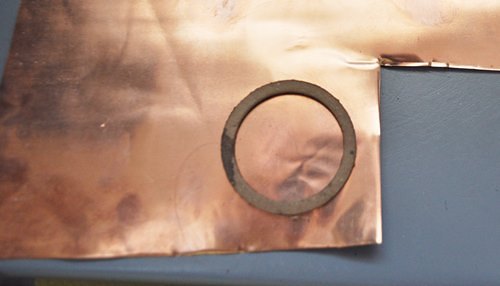 I used regular scissors to cut the copper. It’s thin enough. Tin snips could also be used, but for me and my little hands they are heavy, cumbersome and unnecessary.

Now that you have two, somewhat round pieces, you can either put them in the fixture cup as is or antique them. I used a solution I’ve had for years – 20-30 years! – called Corrosive. That’s it. No company name on it or anything. I couldn’t find anything similar on the internet. Not that there isn’t any. I just couldn’t find it. You might try Vintaj’s Patina Opaque Permanent Ink for a similar look. I’ve never used this, but it says it’s made especially for metals.

It’s time to put them in the bottom of the light fixture cups. I put them inside the cups, but think maybe I’d rather have had them between the cup and the fixture.

That’s all there is to it. A lot of explaining and pictures for a very simple process.

I think taller, slightly skinnier candles would look nice, but these chunky ones were all I had. Kinda negates the reason for the copper disc, doesn’t it? But I also like the idea of putting an ink well and pen nibs in the cups.

Another acquisition from a yard sale last year. Th

Happy birthday and Merry Christmas to me from me!

@erins_vintagetreasures (my daughter) and I got in

It's Thanksgiving already! I was so proud that I g

Happy Thanksgiving! The caption on this picture sa