I’m getting tired of digging through my “for sale” stash. I need to see something new. Something different. So I got out this weekend. I went to 3 or 4 on Friday and 10 out of 16 on Saturday.

With the Saturday list, I got the brilliant idea of doing a reverse address look up on whitepages.com. See, when you do a reverse look up, it gives, not only the names, but the ages of the people living in the house. So, if it’s 20 or 30 somethings, I won’t be in a hurry, but if they’re 65+, well, that could mean an estate sale being called a yard sale or maybe they’re living, but cleaning out stuff they’ve had 40-50 years. Ya just never know.

So, armed with that information and the address of an advertised estate sale, I hit the road at 6:30 ayem.

First one was one street over from me. WhitePages said they were 65+. Um….. those people must have moved. The people having the sale were mid 30’s. Went to school with my daughter. Lots of baby and kid stuff. I bought nothing.

#2 was an apartment. I don’t generally get in a hurry to go to sales in apartments, but WhitePages said the occupant was 65+ and it told the truth this time. She was moving. I was the first and only shopper! I did get a couple of decent things.

A plant stand and a washboard. Got a top made from some pretty fabric that I thought I might could remake, but no. Not enough fabric to do anything with. Also got a metal shelf that I didn’t realize until I got it home that it was all bent up and not in a good way. I think that’s all for that sale.

Next up was a sale at the American Legion. Those group sales can often be pretty good. Not so this one. it was two, maybe three families. And a husband, who obviously was not a native to our area, was talking loudly about how retail was not the business to be in these days…. and why…. and talking about our newly elected city council members and on and on, talking like he was an expert on everything and never giving the men listening a chance to say anything. Very annoying and impossible to tune out. I tried, I really did, but I left empty handed. Quickly. Nexxxxxt……

A  house next door to a tiny church. I knew the house belonged to the church, but wasn’t sure if anyone had been living there. Two ladies were setting up the sale. They said there was stuff inside, too. I asked, just being friendly/nosy, if the sale was donated stuff or if someone had lived in the house.

Oh, there’s stuff all through! We’re trying to pull it out and get it where you can move around.

“But is it all donations or has someone……”
There’s stuff all in the house! Sooo much stuff!
“But is it all dona……”
You can walk through the whole house. There’re clothes in that room, toys in this one and more stuff in the others.
(I’m getting frustrated by this time and regretting saying anything.) “Yes, but is it donations?”
Oh! You’re asking if it’s donations? Yes, different people have donated all this stuff and…. blah, blah, blah……

Sigh. I really wished I hadn’t asked. I mean, one glance would have given me the answer to what I was asking.

Out of a 4 room house packed so full it was hard to move around, I bought this pink, enamelware, double boiler and some plaid fabric I thought would make good pumpkins or pillows. Yeah. Just something to add to my fabric hoard. Maybe if there had been some light I’d have found more.

I did NOT buy this…… thing. But I thought it was funny. Sorry for the blurry picture. It was dark in there. 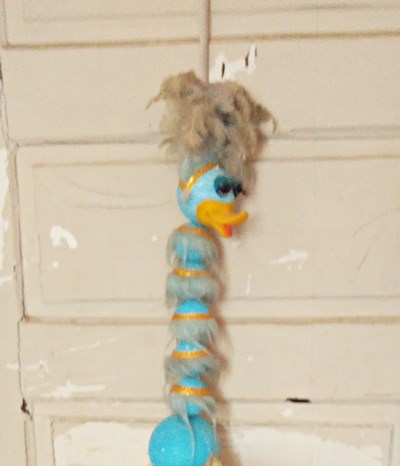 Next sale was a no show.

The next sale tricked me. They have them often, it’s new, fleamarkety stuff, and I didn’t catch the address. It’s all real close to the street, they’re all sitting out there staring at you, so I went ahead and stopped, muttering under my breath while getting out of the car. But I turned into Miz Friendly, turned on the charm, looked at the two tables of crap, smiled, said thanks and left.

So. The next one was a moving sale and WhitePages said they were 65+. Gut instinct told me it probably wasn’t the older people moving, but just in case……

I don’t know who was moving. There were, oh, I dunno, maybe three tables of ick, blah, junk. But there was this really cool, oval, metal wash tub. No price. Nothing was priced. I hate that. When nothing at all is priced, you can’t even guess what they might charge for something you’re interested in. Could be high, could be low. So I asked.

Now, there’s probably 20 feet between each of us in this conversation, so picture, if you will, everyone talking loudly bordering on yelling.

Me: How much is the metal tub?

Person #1: She says that’s more than she’s got.

Person #2: Well what would you give me for it? Somebody offered me a lot more than $30 for it, but I didn’t want to sell it then.

Oh, good grief. She just said she wouldn’t take less than $30 for it. I’m pretty sure she’d balk at my $10 offer and I’d really rather it be $5! So I just said, quite pleasantly: Oh, you should have sold it to them! I wouldn’t want to insult you. That’s why I like things to be priced. It saves us from being embarrassed.

Person #1: We were so overwhelmed pulling all this stuff out that we just didn’t price anything.

Sigh. It had to have taken all of an afternoon to get “all that stuff” out. If that’s all I had to put in a yard sale, I wouldn’t bother. But I didn’t say that. I just smiled, sympathized and mumbled something about how much work having a yard sale is and left.

Time to head the neighboring town to the advertised estate sale! And here’s what I got:

Yep. That’s it. That was the emptiest, most pitiful excuse of an estate sale I’ve ever seen. No, they hadn’t sold out. They just didn’t have anything. I got kind of excited when I saw a dresser for $5, but looking closer, tilting my head and squinting, I figured out that the $ was an 8. So 85, not $5. Oh, well. It looked like family had taken most of the furniture and threw out the “junk.” Wish I could have gotten in on the garbage. Oh, but listen to this. Another awkward situation.

When I pulled up there were a few cars out there and people were standing around in the driveway talking. So I walk up and stand at what I perceive to be the end of the line. I stood around wondering what time they opened? There wasn’t a time in the paper and it was 8:30 right then. Did I want to wait until 9:00? Then someone else walked up and they told him it was all in the house. Um…… Yeah. The people “in line” were just visiting each other. Nobody noticed me standing awkwardly around? Proving once again that I’m pretty invisible. Unremarkable.

Now, let me back up to Friday. In the same neighboring town, there was another estate sale. On Friday, full price day, I got these things: 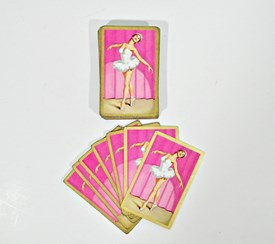 Two sets of playing cards. I’m pretty sure there was something else, but can’t think what it might have been.

That sale was mostly overpriced. Not horribly so, I’ve certainly seen worse, but just enough that I didn’t want to pay that much. For example, books $3 hardbacks and $1 paperbacks.

I went back Saturday morning and did a bit better: 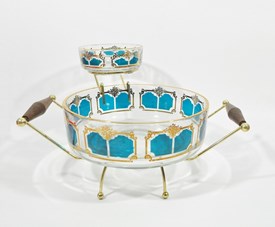 Last weekend, I came home with these things:

I think that gets the highlights. I got some gray, pin stripe pants fabric – again, more fabric to add to my hoard – a Tupperware mistake that goes straight to the yard sale box, a bacon, egg and cheese biscuit, and maybe a couple of other things.

As always, if you see anything you’re interested in, let me know. Some things will go to the booth and who knows when I’ll get the others listed in the blog shop or Etsy? It could be this week, a month, several months or even years!