I dearly loved all my grandparents and each was special in their own way. I want to say that my mother’s father and I had the most special relationship, but that isn’t fair. We did, but so did Grandma and I, and Papaw and I and Mamaw and I. Each was different.

Grandpa called me his “gal”. I was his most well behaved grandchild and it didn’t hurt that I was the only one who lived in the same town. We’d sit on the front porch swing and he’d peel and cut apple slices for me. With his dirty pocket knife. Oh, he’d wipe it off on his pants first and the germs, of course, never made us sick. That’s one of my favorite memories or our time together. The other was the words  I’ve got some new baby birds! You see, he raised parakeets.

My first recollection of him and the birds was when I was 5 or 6 years old. He had an unpainted wood shed where he kept the birds. When there were babies, he’d lift me up to see in the nest. Those beautiful little birds always had their mouths open and they were all mouth. Scrawny, featherless mouths. But I so loved seeing them and that was one of our special times together. So when I found this little birdcage at an antique mall the other day, all those memories came flooding back. Not that they’re ever that far from the surface anyway.

It came just like that with the bird in the nest and the bottle. $10.00. I’d gone in just to breeze through, but had to spend that $10.00. I believe it was a cage people took their bird home in when they bought it or perhaps they bought the cage later if they wanted their bird to travel with them. Or who knows? Maybe it’s for baby chickens. I really have no idea. But I also wonder if Grandpa had some? I don’t know what era this is from. Maybe it’s older than he would have used. I simply can’t remember how he got his birds to their new owners. 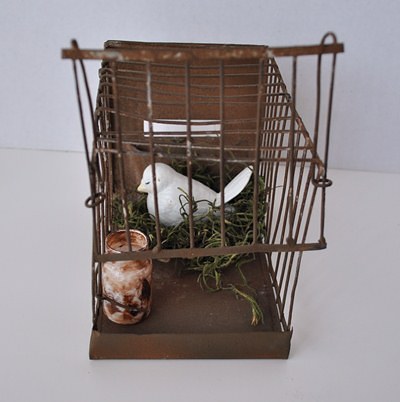 It’s funny how different things can trigger memories. This particular memory can also be triggered by the smell of hay and birdseed. I’ll never forget being at the library once when a man came in who had that smell to him. It made me want to cry. I wanted to be near him. Wanted him to be my grandpa. Imagine my shock when he left and the library workers turned up their nose and talked about how he smelled like a wild animal. Huh? Is that what people thought my grandpa smelled like? That made me so sad.

One final thing about Grandpa. He got Alzheimer’s. In 1976 they called it hardening of the arteries. It was heartbreaking to watch this man who once said he’d “work til the day he died” slowly slipping away from us. I’d bet most of you reading this have been affected by this disease in one way or another, too. Shortly before he died he was in the hospital. I stopped by to visit and Grandma, in the way people will do said, “Do you know who that is?” His eyes had a moment of clarity and he said, “That’s my gal!” and he left us again.