After such a bad April, then a nice May, I thought sales were on the way back, but I was…… wrong. Bad wrong. Don’t know if I could have been any more mistaken. June was bad. Real bad. It was like the mall wasn’t even open. Of course, it was, but the month was a literal wash-out. It rained and rained and rained and rained some more. I feel that hurt business. Oh, I sold smalls but not enough to make even half the rent of our large, double booth.

Etsy was slow as well. Not sure the whys on that. Probably a combination of things. Etsy itself has been implementing tests and changes, I still don’t have my store built up as much as I should/could, summer vacations keeping people away from the computer, etc.

But enough excuses. Just what did sell? Let’s start with the booth, shall we?

First day of June brought a sale. I always like to sell something the first day of the month. I read somewhere that someone had a lot of success selling rolled up music or book pages and thought I’d give it a try. I chose to rip out a Czerny Velocity book. Had no qualms about that one. Hated velocity!! Ugh. So I ripped those pages out, rolled them up, tied some twine around them, put a dab of glue on the knot and priced them a dollar each. Sold all 9 of them a day or two later. But did I bother to do it again? Nooooo…. of course not. 🙁

I read somewhere that someone had a lot of success selling rolled up music or book pages and thought I’d give it a try. I chose to rip out a Czerny Velocity piano book. Had no qualms about that one. Hated velocity!! Ugh. So I ripped those pages out, rolled them up, tied some twine around them, put a dab of glue on the knot and priced them a dollar each. Sold all 9 of them a day or two later. But did I bother to do it again? Nooooo…. of course not. 🙁

A magazine rack my mother painted in the mid-1960’s. Painting furniture is nothing new, ya know.

Wooden mallet. It was left over at one of our estate sales. Bad picture, but at least it is a picture.

Round chicken feeder. The rectangular one sold last month.

Antique dresser mirror frame. I had $75 on it for at least a year. Finally reduced it to $40 and 3(?) months later it sold. Guess if I had painted it and put a mirror or blackboard in it, it wouldn’t have hung around so long, but doggone it! I’m not going to paint a good finish! However, I could have not been lazy and put a mirror in it.

Three skinny, brass candlesticks. I originally thought I’d put them online then decided there were just too many out there, so put them in the booth.

Bronze lion paperweight. Something else I thought I was going to put online and sell for big money. Research showed me that only the ones with inscriptions on them sold for a lot of money. The plain ones, as is usually my luck, not so much. If I messed up and could have got significantly more, I don’t wanna know!

Set of two, floral, Hall bowls. They stayed a lot longer than I expected.

The last fence piece. They all sold to one person last month, but I believe they missed this one. I wonder if the same person bought this one or if it went home with someone else? 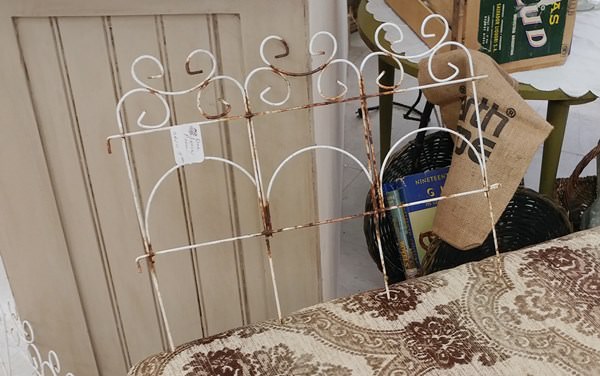 A lamp shade skeleton. These usually sell for me. I don’t seek them out, but it’s a good way to get rid of icky lamp shades. Rip the icky fabric off and sell the skeleton.

July has started off with a bang, though. If nothing else sells the rest of the month, the first day more than paid our rent! Stay tuned for that report in August.

This little guy is from the 1940’s. He apparently had something to do with Judson College’s (Alabama) art department. No one bought him at a recent estate sale we had, the same sale the mallet came from, probably because he was so moth-eaten, but by golly! Where are you going to find another one? I certainly couldn’t find one online. He sold quicker than I expected.

Small, Dinkler Tutwiler, restaurantware dish. This one would have been from the Tutwiler hotel in Birmingham where actress Tallulah Bankhead threw her post-wedding party.

The item that saved the month…. The never before opened box of Eva Zeisel glasses and Kari-All. The thing that caused me to finally make a talkie. A video where I was in front of the camera and talking. The glasses and Kari-All only lasted a week or so.

Playing cards from the Grand Hotel in Mobile, Alabama. I expected them to sell to someone in Alabama, but they went to Boston.

So that’s it. How about you? How were your sales? Would you have bought any of that for resale?

If you can’t get enough sales reports, click here to see my friend Florence of Vintage Southern Picks sharing her Etsy and eBay sales for June.

Happy sales to us all!

Owner at Just Vintage
Hi! I'm Wanda, the owner of Just Vintage and this is my blog. Just Vintage sells decor and collectibles. This blog is all about the business, our home, our DIY projects and our lives.

Search This Site
Product Search
Get Updates In Your InBox

Whoops, you're not connected to Mailchimp. You need to enter a valid Mailchimp API key.

Please do not follow me on Bloglovin’! They do not update this blog. They haven’t shown a post from here since March of 2018!!

Finally the sun is shining!!! This is the undusted

Took a few new things to the booth and rearranged

Oh my heart! Swipe to see the writing on the back.